Welcome to the route of the best football places in Madrid for soccer fans! Buy Real Madrid tickets and make this day more unforgettable following our tips.

To begin with, we begin the day by visiting the temple of football par excellence, the Santiago Bernabéu itself. The Real Madrid Museum is the third most visited museum in the city. Inside, football fans will enjoy learning about the club’s singular history, seeing the impressive trophies they have won throughout the decades, taking a picture with the Champions League Cup and, above all, visiting the changing rooms and the press room. It truly is a unique experience to feel like part of the merengue team! Ticket prices for the Bernabéu Tour range from €18 to €25 with discounts for madridistas (i.e. Real Madrid members or season ticket holders)!

In addition, thanks to the stadium remodeling works underway, it will be possible to take a tour of the 360o terrace that the club is going to boast in order to enjoy the best views of Madrid and the stadium. It is a visit that you cannot miss! 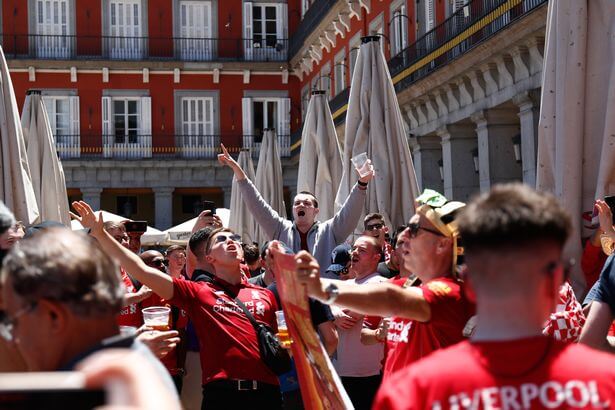 If you have already visited the Museum and the Official Real Madrid Store, it is time to head to the center of Madrid. We not only recommend the historical Plaza Mayor (Main Square) because it is an essential monument in its own right and a jewel of the city, but also because this is the meeting place for the fans of the visiting teams. Liverpool fans, also known as the Reds, will gather here to sing their songs and support their team. The anthem ‘You’ll Never Walk Alone’ will surely be heard in many places in the city. It is emotion in its purest form! 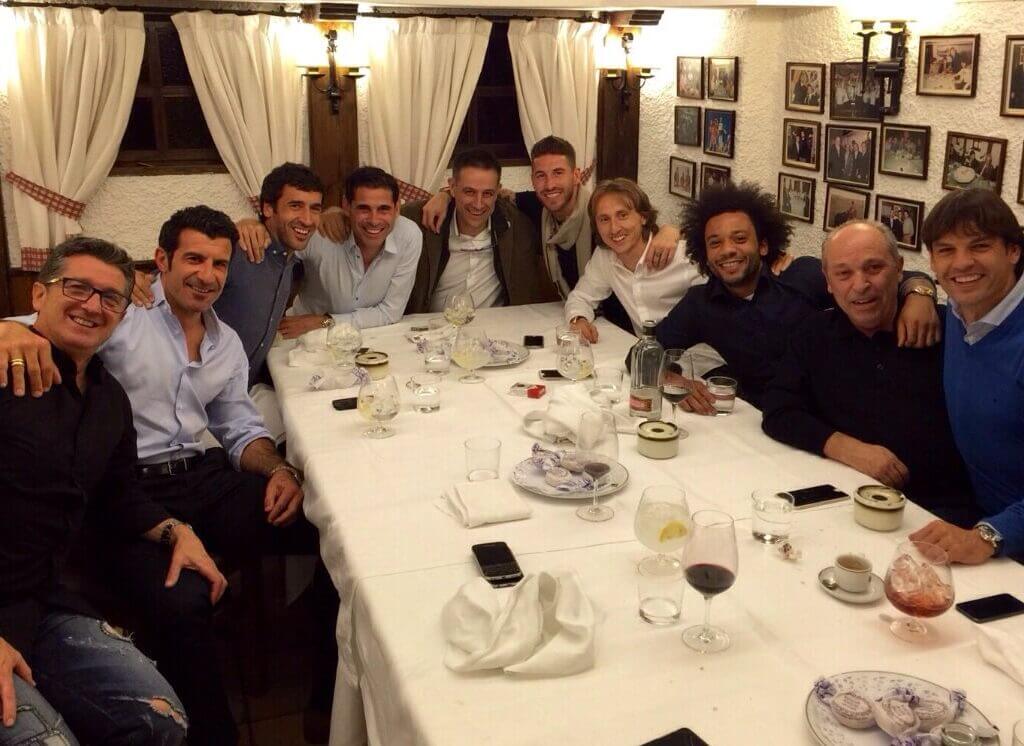 So now it’s time to eat and there is no better way of doing that than in the chosen places where the most famous soccer players like to go. There are options for all tastes in this respect, ranging from the delicious Basque cuisine at Txistu (Pl. Ángel Carbajo, 6) where you can enjoy spectacular Bilbao-style cod or its famous txangurro croquettes, to the mouth-watering meats at Asador Donostiarra (C. de la Infanta Mercedes, 79). On the other hand, if you prefer the most modern places with avant-garde cuisine, you must visit Tatel (P.º de la Castellana, 36), one of the restaurants that Cristiano Ronaldo frequented the most, or Kabuki (Av. del Pdte Carmona, 2) where they make the perfect fusion between Asian and Mediterranean cuisine 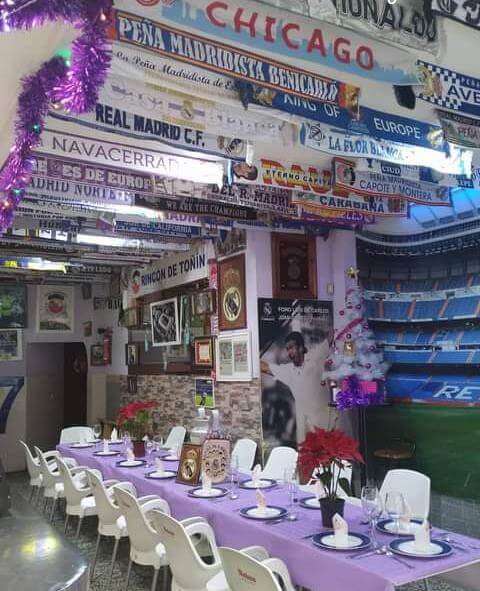 We are aware that not all budgets can afford this type of luxury, so we recommend two 100% authentic places where you can listen to great stories from Real Madrid fans. These are the La Coma Madridista Supporters Club (Av del Cardenal Herrera Oria, 245) and the Capote and Montera Supporters Club (C. Hernández Mas, 20). In the latter you will find a complete merengue decoration with its ceiling covered in flags and scarves of Madrid fan clubs from all over the world and a wall with a photo of the Bernabéu from the grass. They say that Toñín, the owner of the bar, is quite a character who admires his team like no one else, and that you cannot leave there without trying his Madrid stew. What are you waiting for then? This is where you need to go if you truly want to experience Spanish football with real fans. Also, if you visit Capote y Montera, which is located in Vallecas, you can go to see the Rayo Vallecano stadium, one of the oldest football stadiums in Madrid and home to another Madrid football team that usually play in La Liga or the 1st division.

Finally, you cannot miss out on a visit to the famous Fuente de Cibeles (Cibeles Fountain) where Real Madrid celebrates its victories. Who hasn´t seen images of team captains putting a scarf around the neck of the goddess Cibeles upon winning the Champions League? This custom has been going on since 1962, but this tradition was not started by the madridistas. In fact it was the atléticos who began the ritual. Indeed, after one particular game many years ago, a few random Atlético de Madrid supporters began to celebrate the victory of their team at the fountain and it became a trend over time.

Some time later, Real Madrid fans also began to celebrate their own victories at the same fountain. How did they manage to keep the fountain as their own? Well, they won the right to it after winning a lot more silverware than the rojiblancos (red and whites) team did between 1985 and 1990. Since then, this has been Real Madrid territory.

As a bonus, we recommend you go to the Santiago Bernabéu early, about 2 hours before the game, to experience the atmosphere amongst the Real Madrid fans who gather around Calle Marcelino Santa María and Padre Damián. You can also see the team bus entering at the corner between Avenida de Concha Espina and Padre Damián in the Plaza de los Sagrados Corazones. 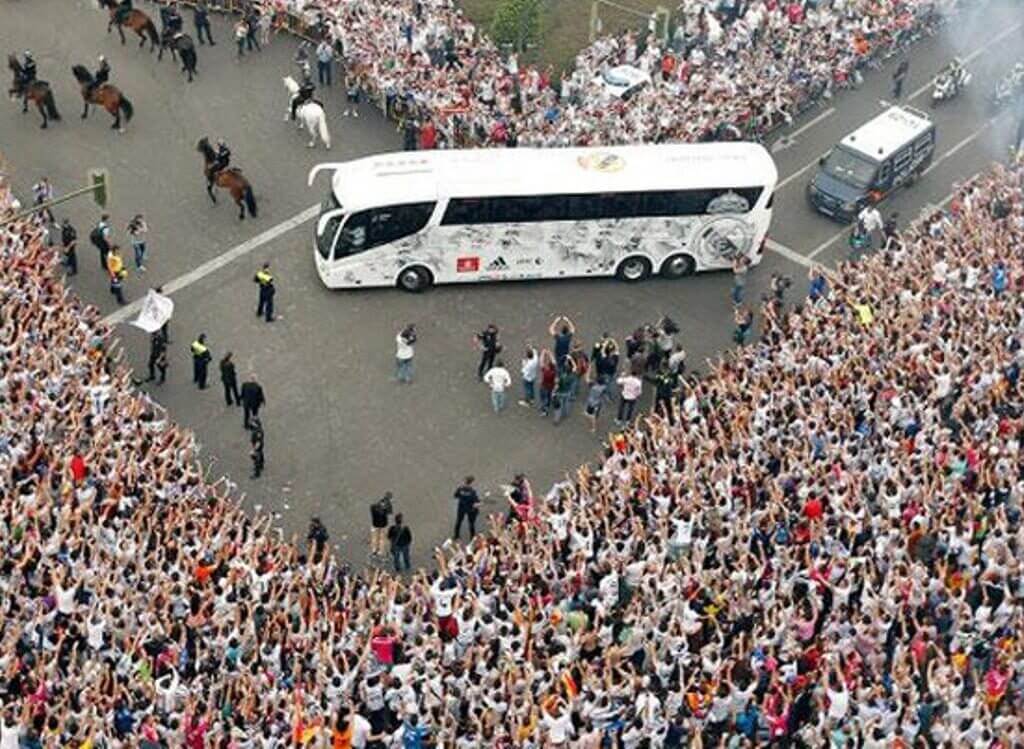 If you stay on longer in Madrid, you can also go to the Real Madrid Sports City in Valdebebas and try to get an autograph from your idols from their car as they enter the training ground.

We hope that all these tips ensure that you have an unforgettable and thorough experience which will culminate in watching Real Madrid vs Liverpool live at the Santiago Bernabéu. All the way, go Real!